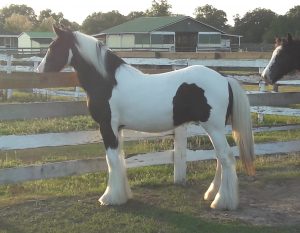 VV King William has done it again!  Liam’s Regal Game Changer is a fancy colt with a great build and markings.  William is the sire of 29x Supreme Champion mare GG Kiss Me Kate and 8x Supreme Champion GG Lyuba’s King Zeus.  Game Changer is a half brother to these Champions!  William’s sire is Breyer and Vogue model The Gypsy King, who was also trained in dressage.  Game Changer’s dam Mystic Moon is a big, beautiful black granddaughter of Orion.  Both William and Mystic Moon trace back to The Governor, a son of the amazing Harkaway Tansy.  Game Changer’s pedigree also includes Chief and The Old Horse of Wales.  This colt has a wonderful disposition and is very eager to learn.