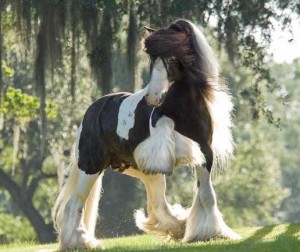 Imported to the U.S. in the fall of 2006, Shogun was believed to be homozygous and sired four foals that were imported to the states, as well as another 11 born here. He was a magnificent stallion, very impressive in presence and stature.

The Gypsy Vanner foals by Shogun:

The Get of Shogun