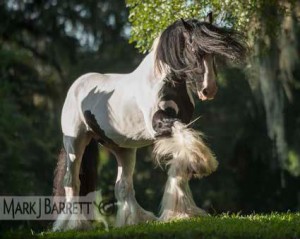 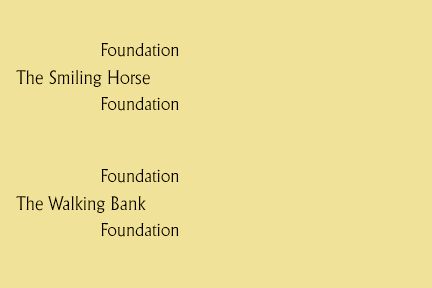 The sire of 84 foals and the first stallion imported to America by Dennis and Cindy in 1998, this celebrated Gypsy Vanner is probably the most photographed and recognizable of his breed in the world.

He has graced magazine covers, calendars, been featured in articles both on the world wide web and in print, he was selected to be the inspiration for a Breyer model horse named after him… his impact on the world and therefore his breed was profound.

As Dennis tells the tale of his discovery in England —

As Cindy and I approached a secluded field to see the sire of a filly we wanted to buy, we saw one of the most beautiful horses either of us had ever seen. 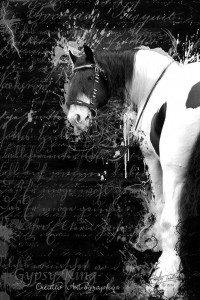 He moved across the field with a presence and elegance that is hard to describe. He reminded us of a proud lion, confident of his position in life. His feathers started at his knees and swayed with every step. The decision to buy his daughter was very easy after seeing this magnificent animal. Cindy and I learned without surprise that he was not for sale and that his name was Bill.

From the first time Cindy and I saw Bill, we thought he was extraordinary and wanted to buy him. We accomplished what we thought would be impossible when we were allowed to buy the horse who had become The King.

In April of 1998, the horse who was now The Gypsy King arrived in America to join Cushti Bok. They were the first two foundation sires of the Gypsy Vanner Horse in North America. 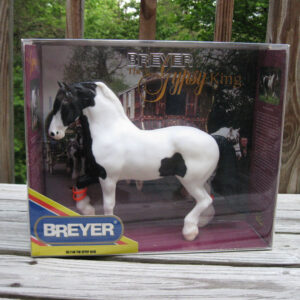 In March of 1999, The Gypsy King became the sire of the first Gypsy Vanner Horse foaled in North America, a filly out of Bat. With The Gypsy King and Bat the legend began.

Shortly after his arrival in America, the Breyer Model Horse company approached the Thompsons about creating a model of Bill for their popular line of famous horses. In January 2001, The Gypsy King Breyer model was released became one of their top 10 best selling models for that year. 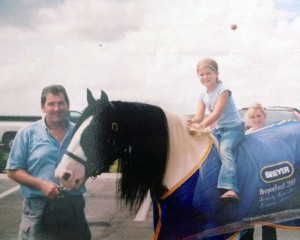 Dennis presents The Gypsy King at Breyerfest in 2001.

Invited as a special guest to Breyerfest at the Kentucky Horse Park, The Gypsy King appeared before thousands of guests. His Breyer model was even featured on the popular shopping channel QVC.

Not just another beautiful face, The Gypsy King spent time with renown dressage rider and trainer Pam Fowler Grace, who proclaimed him capable of achieving Grand Prix level if given the opportunity. Pam was just one of several astute 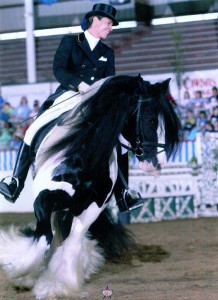 horsemen and women who enjoyed their time with Bill. Lynn Palm also presented Bill at the Equine Affair in both Ohio and Massachusetts in 2003 and was very well received. In November of 2004, The Gypsy King was presented at the Jacksonville Celebration of the Horse and in April of 2006, Pam Fowler Grace rejoined him at the Pin Oak Charity Horse Show, which has been one of the largest horse shows in Texas for many years.

“He had an illustrious career and I was privileged to have him in my life.” —Dennis Thompson

Some horses have a destiny with greatness and the colt named Bill was one of those. His passing marked the end of an era and was recognized by Gypsy Vanner admirers across the globe. Read his tribute in the Ocala Star Banner…
Click here to visit his page on Vanner Central

Just a few of The Gypsy King’s most recognizable get include:

The Get of The Gypsy King